Geographical Area / Watershed:
Council Grove Reservoir drainage, HUC 1107020101 . The Council Grove Reservoir watershed covers 259 square miles, 165,760 acres, and is located at the headwaters of the Neosho River in the Flint Hills Eco region. The lake itself covers 2,589 acres with a maximum depth of 36’. The Reservoir is managed by the U.S. Army Corps of Engineers out of the Tulsa District. Authorized by the Flood Control Act of 1950, the project was designed and built by the Tulsa District, Corps of Engineers, at a cost of $11.5 million. Construction began in 1962, and the project was placed in full flood control operation in October 1964. The project is one of seven reservoirs authorized for full development of the Neosho River Basin in Kansas and Oklahoma. Due to its location in the Flint Hills, 67% of the land use in the watershed is native tallgrass prairie. These lush grasslands are used primarily to graze cattle for three to six months of the year. Another 21% of the land use is for crop production. Common crops produced in the area include wheat, corn, soybeans, alfalfa or other forage crop which are mainly grown in some type of rotation. As indicated on the map below, the cropland is widely distributed throughout the watershed with more concentration in the valley along the main stem of the Neosho River. There are three communities located partially or totally within the watershed, White City, Dwight and Alta Vista. A developed area is also located on the western edge on the grounds of the Herington Municipal Airport. The airfield was built as a bomber staging area during World War II and now the runways are home to the largest Confined Animal Feeding Operation in the watershed, the Tiffany Cattle Company. These developed areas account for less than 1% of the total land use in the watershed. Each of the three communities, White City, Dwight and Alta Vista use groundwater sources for their public water supply. At least part of the wells in each of the cities is located within the Twin Lakes watershed. The largest public water supply is the Council Grove City Reservoir which provides water for the City of Council Grove. The Council Grove Federal Reservoir is a backup water supply for the cities of Council Grove, Emporia and Iola. The communities would most likely access the water supply through releases from the Lake into the Neosho River. Most of the population in the watershed obtains their water through private groundwater wells. White City and Dwight have both recently updated their water supply and waste water systems with grant funds obtained through State and Federal sources. There are 10 registered confined animal feedlot operations (CAFOs) that are either certified (8) or permitted (2), which are primarily located in the central portion of the watershed. One of two permitted facilities is of sufficient size (beef, 15,500 animal units) to warrant NPDES permitting (KS0117218 or ANEMR- C001). All the permitted and certified livestock facilities (2 dairy, 5 beef, and 3 swine) have waste management systems designed to minimize runoff entering their operation or detaining runoff emanating from their facilities. In addition, they are designed to retain a 25- year, 24-hr rainfall/runoff event as well as an anticipated two weeks of normal wastewater from their operations.
Water Bodies:
The headwaters of the Neosho River, the Council Grove Reservoir, and Council Grove City Lake (locally known as the “Twin Lakes”) . Surface waters in this watershed are generally used for aquatic life support (fish), human health purposes, domestic water supply, recreation (fishing, boating, and swimming), groundwater recharge, industrial water supply, irrigation and livestock watering.

Other Goal or Objective:
Directly addressing: Eutrophication in the Council Grove Reservoir and Bacteria in the Neosho River.
Positively Effecting: Siltation in the Council Grove Reservoir, dissolved oxygen in Munkers Creek and total phosphorus in the Neosho River near Parkerville
Project Goals and Objectives:
Quality
Surface water
Conservation
Restoration

http://water.epa.gov/polwaste/nps/success319/upload/ks_neosho.pdf
The Twin Lakes WRAPS has been active in the watershed since 2003.
In addition to cover crop workshops, water conservation activities for school-aged children and other producer workshops, the Twin Lakes WRAPS is proud to be the host of the Twin Lakes Water Festival in September of each year. The Festival is free for 4th Grade Classes when registered by their teachers. The day is filled with curriculum-linked activities to develop an awareness to the importance of a clean & plentiful water supply, foster a respect for a healthy environment and make a commitment to use natural resources wisely. Participants learn from area professionals about water & natural resource conservation, changing environmental attitudes, water & technology, water protection, water science & biology, wildlife that depend on water and much more! The learning stations are led by volunteers from state and federal entities along with local organizations. 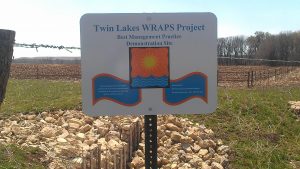 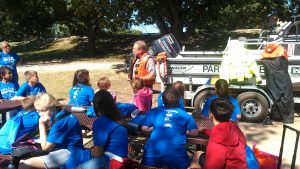